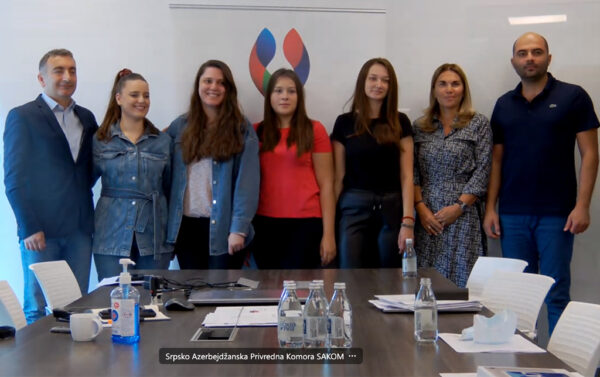 During the 5th SAKOM Online Meeting of the Board of Directors, held on September 6th, 2021, the following agenda items were discussed:

Both candidates are in unenviable financial situations, and they strive to self-improve and continue their studies, during which they have already managed to accomplish outstanding academic results.

The SAKOM Board Members unanimously supported the two new candidates; hence Anastasija Plazinić, a Faculty of Economics student in Belgrade, and Jelena Rakić, the Faculty of Law student in Novi Sad, were accepted as SAKOM scholarship holders.

Mr. Ahmet Murat Turkoglu, the SAKOM President, pointed out that SAKOM intends to expand its scholarship holders so that it is in line with the number of admitted SAKOM members during the annual session of the SAKOM Assembly dated May 28, 2021. In this regard, SAKOM currently provides scholarships to 11 students and aims to increase that number to 20. SAKOM’s scholarship amounts to 100.00 EUR in dinar equivalent and is paid to scholarship holders every month for one year.

2. Holding a discussion and deciding on the donation of Samsung tablets, model TAB SM Galaxy Tab A7 T500, to Jelena Rakić and Anastasia Plazinić.

Considering that the Assembly of the City of Belgrade initiated the action of purchasing tablets that will facilitate learning for all pupils of elementary schools from the territory of the city of Belgrade, and considering that SAKOM, under the decision of the SAKOM Board of Directors dated July 7, 2021, procured tablets TAB SM Galaxy Tab A7 T500 for its scholarship holders, it was decided to procure an identical tablet to the new scholarship holders, Anastasia Plazinić and Jelena Rakić.

3. Holding a discussion and deciding on the extension of the scholarship of Marta Galjak,
a senior student of the Faculty of Biology, University of Belgrade, module: Molecular Biology and Physiology, and Nikolija Galjak, a full-time second-year student of the Faculty of Medicine, University of Belgrade, due to the achieved results and unenviable financial situation, i.e., having only support provided by a single mother.

4. Informing the SAKOM Board Members about the Chamber’s member’s – Azvirt Branch Belgrade – donation of the device for measuring moisture used in museums to preserve precious books to the Monastery Duboki Potok.

The Board Members were informed about Azvirt’s donation to the Monastery Duboki Potok (which you can read more about here) and its intention to help the scholarship holders purchase faculty textbooks for the studies, and attend language courses to improve their abilities in the field of language.