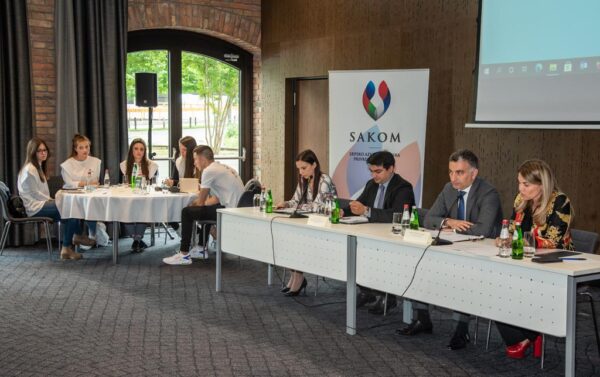 On May 28, 2021, an annual session of the Assembly and the meeting of the Board of Directors of the Serbian-Azerbaijani Chamber of Commerce (SAKOM) was held in Radisson Collection Hotel "Old Mill".

This gathering served as a special occasion because it represents an annual gathering of SAKOM members and the first offline gathering after the pandemic's hardships. Furthermore, May 28 marks the National Day of the Republic of Azerbaijan. Hence, the event carried meaningful importance for its members and guests.

Significant shift that was adopted relates to the changes in the Board of Directors. Namely, our esteemed Vice-president Mr. Crnogorac stepped out from the Board since his second mandate has expired, but he will remain the SAKOM member and the Vice-president. Miss Sandra Bogunović, due to maternity leave, could not actively participate in our Board activities but will stay a SAKOM member. The new members of the Board of Directors who replaced Mr. Crnogorac and Miss Bogunović are Mr. Drago Papić from company Naftachem, and Mr. Rade Nikolić from West-gradnja.

As Mr. Turkoglu, the SAKOM President, said during his speech – this annual meeting was both a time for reflection and for innovation: reflection on the SAKOM’s results, innovation for the SAKOM’s future members. The following companies applied and were approved as new SAKOM members

SAKOM also had a great pleasure to introduce its scholarship holders to the SAKOM Assembly - Marta and Nikolija Galjak, Milena Lazarević, Jovana Ristić, Jelisaveta and Petar Isaković, who gave their contribution to this gathering and helped during the preparation and realization of the event itself. You can read more about our scholarship holders in the “Activity” section.

Previous donation to the Monastery Duboki Potok (as per the decision of the Board made on March 29, 2021) was discussed as well as the continuation of the cooperation, which has been started upon the initiative of the esteemed Abbot Romilo Jelić. Considering this monastery's spiritual and educational role, the members carefully paid attention to the presentation on the history of this immovable cultural and religious monument in which old church writings from the 16th century are being kept. Abbot Romilo was not able to join us, but his greetings were conveyed as well as the invitation to SAKOM members to visit the Monastery Duboki Potok, while the monograph on the monastery was distributed to all participants.

During the formal part of the meeting, the certificates of appreciation and the statue with SAKOM emblems were granted to the association’s members, and afterwards everyone stayed at the celebratory lunch.

The entire event, including all side costs, was sponsored by “Azvirt”. Mr. Turkoglu, the director-general of “Azvirt”, noted the following:

“Azvirt” believes in the partnership of our people and our countries. I would like to see that SAKOM like “Azvirt” builds everlasting bonds between Republic of Azerbaijan and Republic of Serbia and its people.

The special gratitude was expressed to the Law Office, Four legal, our Board member Mr. Nikola Tomašević and his associate Maksim Milošević for selfless contribution to the legal aspects of all that SAKOM does.