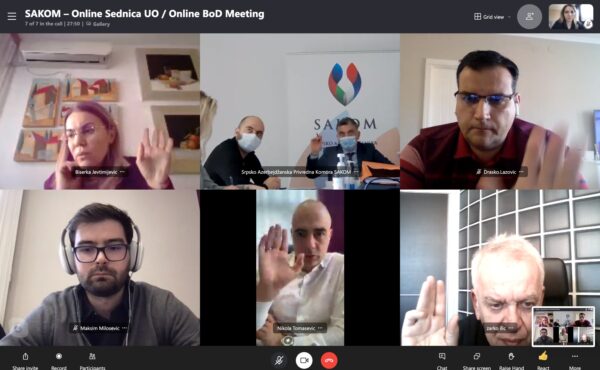 The third Online Meeting of the SAKOM Board of Directors was held on March 29, 2021. Like the two previous meetings, this one was also organized in the form of a hybrid meeting during which the SAKOM President, Mr. Ahmet Murat Turkoglu, SAKOM Board Member Mr. Elshan Rustamzade, and IT support were present in the conference room, while the rest of the Board – SAKOM Vice-president Mrs. Biserka Jevtimijevic and SAKOM Board Members Mr. Žarko Ilić, Mr. Nikola Tomašević and Mr. Draško Lazović) – joined via skype.

The extensive Agenda items marked the Meeting, and the following matters are the Meeting’s highlights, depicting SAKOM’s current activity:

• Upon discussing the scholarship applications of Jelisaveta Isaković, a student at the Faculty of Biology, University of Belgrade, and also of Petar Isaković, a student at the Faculty of Agriculture, University of Belgrade, the Board has voted unanimously on granting to each student the scholarship of 100.00 EUR per month during one year, for excellent results during their studies and given the unenviable financial situation and life without one parent. Unfortunately, their father was one of the doctors who lost the covid battle in February 2021.

Jelisaveta and Petar Isaković signed the scholarship agreement with the SAKOM President Mr. Ahmet Murat Turkoglu and extended their greetings and words of appreciation to the rest of the SAKOM Board.

• At the beginning of March 2021, SAKOM was contacted by the Serbian Orthodox Monastery “Duboki Potok“. The Monastery “Duboki Potok” is situated in the municipality of Zubin Potok, and it belongs to the Eparchy of Raška Prizren, while the monastery church represents the immovable cultural heritage and a cultural monument. Archimandrite Romilo Jelić, Abbot of the Monastery “Duboki Potok”, extended his kind request to SAKOM, regarding the purchase of computer equipment, i.e., laptop, printer, and monitor, enabling them to communicate and implement numerous activities that sometimes require traveling to the nearby place. Furthermore, it is said in the letter that the precious old manuscripts from the 16th century are being kept in the Monastery “Duboki Potok”, some of which were written on parchment. This requires the possession of the special bookshelf cabinet for the storage of old books.

The SAKOM Board got acquainted with the kind letter, sent by the Archimandrite Romilo Jelić, and unanimously voted for the donation of a laptop, monitor and printer to the Monastery “Duboki Potok”, in the donation’s amount of 2,000.00 EUR and agreed to additionally allocate another 2,000.00 EUR for the procurement of a special bookshelf cabinet for storing old manuscripts and books.

The Board also discussed the SAKOM’s annual assembly meeting, and agreed to convene the meeting on May 11, 2021 at 2 PM at the Radisson Collection Hotel “Old Mill” in Belgrade if the situation with the coronavirus and the measures of precautions permit the organization of such gathering. Furthermore, the Board made a decision to sign the lease agreement with the Radisson Hotel, and since April 1, the SAKOM has moved to its new premises, which are a part of the Radisson Hotel executive wing.