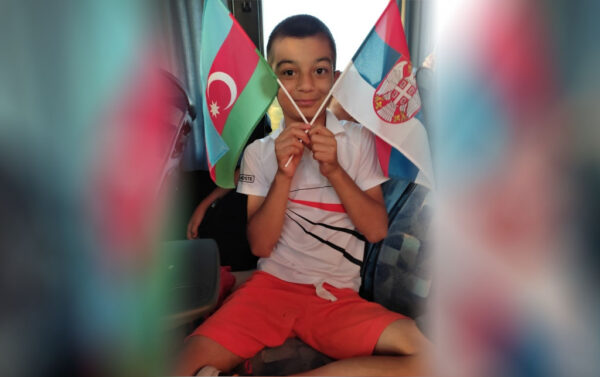 The Winners of the International Mental Arithmetic and Mental Math Olympiad.

Two brothers, Isgandar and Elgun Rustamzade (10 and 7 y/o) from Belgrade won first and second place in the International Mental Arithmetic and Mental Math Olympiad, which was held in Croatia in May of this year.

Isgandar and Elgun are students of the "Kid Genius" school in Belgrade, where they shine in all competitions. As a matter of fact, these two brothers shared between themselves the first place in last year's school competition.

The older Isgandar won the first place, and the younger Elgun the third place in mental calculations. At the Olympiad in Serbia, which was attended by children from all over Serbia, a ten-year-old Isgandar was again the first in mental calculations, and a seven-year-old Elgun was second. At the above-mentioned International Olympiad in Zagreb, attended by 500 children from 15 countries and 150 "Kid Genius" schools across Europe, these two incredibly talented and good boys excelled as representatives of Belgrade and Serbia, winning, once again, first and second place.

For those unfamiliar with "Kid Genius," it is a concept designed for developing intellectual skills from an early age. Through a mental arithmetic program, Isgandar and Elgun mastered the high-speed calculation of a large numbers without the use of aids and developed attention, analytical and logical thinking skills necessary for further education and life.

Teachers Božica Rosić and Jelena Pešić, who work with the Rustamzade brothers at the “Kid Genius” school, describe Isgandar as a very noble and hard-working child who stands out from others with his love of learning and exceptional dedication to work and having hours of practice. Elgun is distinguished as a child who progressed among many talented children with every day, achieving results in a short time, and even overtook his older brother at the International Olympiad in Croatia.

They say that Elgun is a child full of love and warmth and he can never have too much practice. His stability and faith in himself set him apart from others. Elgun is a boy who solves challenges with a smile, which, additionally to the gold medal in mental arithmetic at the 6th International Olympiad, led him to be declared a student of the generation at the "Kid Genius" school.

As native Belgraders in Zagreb, Isgandar and Elgun Rustamzade brightened the face of their school and the city where they are growing up. They brought the medals to Belgrade to their parents, teachers and friends, but their grandparents in Azerbaijan – the country brothers’ parents are coming from - were nothing less than happy about their success. Thus, their medals brought a lot of joy not only to Belgrade but also to Baku.

Their father, Elshen Rustamzade, came to Serbia more than a decade ago as a traffic engineer with the Azerbaijani company "Azvirt," which is very successful in building roads in Serbia but also in bonding the two friendly countries and peoples.

Although their dad speaks Serbian very well, Isgandar and Elgun, like real Belgraders, speak Serbian flawlessly and differ from their friends from school and kindergarten only in that they often carry an Azerbaijani flag with them along the Serbian one, which was also the case at a competition in Croatia. Isgandar, who has finished the third grade of primary school with great success, wants to win medals in science and knowledge for both Serbia and Azerbaijan, but also to become the new Novak Đoković, whose tennis academy he attends in Belgrade.