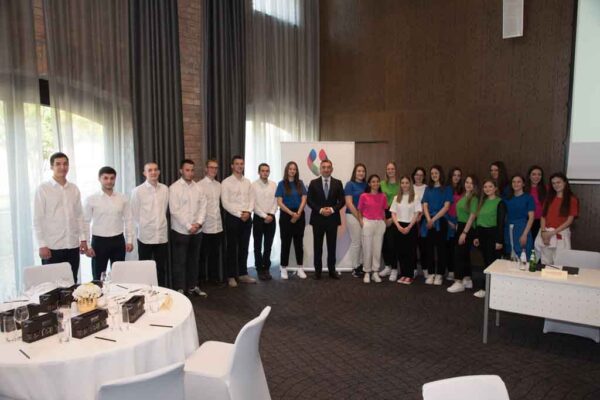 This year’s Serbian-Azerbaijani Chamber of Commerce “SAKOM” assembly session was organized on May 31 in Hotel Radisson Belgrade. The session served as an opportunity to gather SAKOM members and scholarship holders. Dr Aleksandar Pajić, the Mayor of Šabac, and representatives of the Embassy of the Republic of Azerbaijan attended the event as honorary guests.

An idea to shift the association’s focus primarily to humanitarian activity and demonstration of social responsibility emerged among the SAKOM members due to the pandemic caused by COVID-19. Thus, Ahmet Murat Turkoglu, the SAKOM President, launched a scholarship program for students with financial difficulties

. First scholarship holders were accepted a year and a half ago, while during this year’s meeting, twenty-two scholarship holders were presented. They all come from different parts of the Republic of Serbia and study diverse sciences such as law, medicine, electrical engineering, economy, languages, biology and pharmacy. Among them is Taleh Alakbarli, a young man from Azerbaijan who is studying at the Faculty of Political Sciences in Belgrade. SAKOM members expressed their particular satisfaction towards encouraging the cultural exchange and strengthening the bilateral relations between the Republic of Azerbaijan and the Republic of Serbia.

All our scholarship holders receive a monthly payment of 100 euros, and when signing a contract, they also get tablets that significantly facilitate the attendance of online classes. SAKOM is trying to support its scholarship holders and procures textbooks for them and organizes gatherings on the occasion of the New Year when they are given valuable gifts.

During his speech, Mr. Turkoglu highlighted the following: “Young people are the most cherished part of any society because they represent a future's bright part. Therefore, as SAKOM, we have focused on providing financial encouragement to those who need it, with a particular desire to help them realize their dreams in the education field. We invest in those who will help others and give it back to society tomorrow. We want to make their route through education easier.”

As it is known, Serbian-Azerbaijani Chamber of Commerce – SAKOM gathers mainly construction companies that are involved together with the Azerbaijani company Azvirt in implementing some of the most important infrastructure projects in the Republic of Serbia; but also, individuals who contribute to further improving relations between the two countries. The association's goal is to respond to challenges in a joint, socially responsible manner and always be helpful members of the communities where we operate. Thus, during the state of emergency caused by the coronavirus, SAKOM helped health institutions while companies performed construction work, where they were engaged, without interruption.

SAKOM President, Mr. Ahmet Murat Turkoglu, highlighted during his speech that modern global crises have confirmed that being socially responsible has become more critical than ever before, and SAKOM will spare no effort in enabling scholarships for even more smart students, nor will SAKOM spare any effort when it comes to implementing humanitarian and cultural projects; all in order to remain a reliable partner of its members and the Azerbaijani and Serbian society.

During the session, SAKOM’s intention to continue to nurture and cultivate the cordial friendship with the fourteen-century-old Duboki Potok Monastery in northern Kosovo, which represents an immovable cultural heritage, was supported. SAKOM, but also its member the company Azvirt will continue supporting the small fraternity of the Duboki Potok Monastery in preserving the cultural heritage and pass it on to future generations undamaged. With deep gratitude, Abbot Damjan, the head of this Monastery, sent an invitation to the SAKOM members and scholarship holders to visit this cultural and religious monument, which once had a crucial educational role. As a sign of gratitude, SAKOM members and honorary guests were delivered with brandy (rakija) made by the brotherhood of the Duboki Potok Monastery.

Dr Aleksandar Pajić, the Mayor of Šabac Municipality - which recommended us two excellent students, one of whom is extraordinarily talented - expressed his praise to the Serbian-Azerbaijani Chamber of Commerce's commitment to promoting education and supporting young people in their efforts to push their boundaries.

By establishing a cooperation with the sports association, VIN Academy from Belgrade, SAKOM has provided its scholarship holders with an opportunity to train for free at this club, which founder doctor, neurosurgeon Vuk Aleksić said that he was pleased to contribute to SAKOM's scholarship program because he recognized that the same goals are being shared and the same values in young people are being promoted. A special surprise for the scholarship holders was prepared by the company ADORÉ House of Chocolate, which awarded scholarship holders with their products. On this occasion, we would like to especially thank the ADORÉ management, whose donation represents a recognition of our organization and all our efforts.

The Assembly adopted the activity report and financial report for 2021 (can be downloaded below) and elected a new member of the Board of Directors, Mr. Saša Pavlović from DIS Niskogradnja (SAKOM member), instead of Mr. Zoran Mitrović, whose second term has expired.

Mr. Turkoglu ended the gathering with the following words: