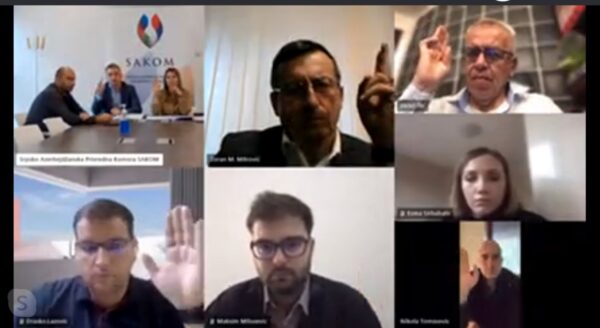 The sixth online Board Meeting of the Serbian-Azerbaijani Chamber of Commerce “SAKOM” was held on October 8, 2021. The meeting’s main topic was the awarding of scholarships to students of the Faculty of Philology, University of Belgrade – Nemanja Jovanović (Department of Serbian with South-Slavonic Languages: Bulgarian Language) and Aleksa Vujanović (Department of Romance Languages: French Language), who have chosen Azerbaijani Language as an extra subject in addition to their primary languages.

Moreover, scholarship holders of the Faculty of Philology Milena Lazarević and Jovana Ristić (Department of Oriental Languages: Turkish Language), who also have chosen the Azerbaijani language as an extra subject, were approved for an extension of their scholarship for another year, given that Milena Lazarević and Jovana Ristić achieved exceptional results during the previous year and showed a sincere desire to improve their knowledge and skills.

In order to continue the promotion of cultural exchange between the Republic of Serbia and the Republic of Azerbaijan, during this meeting, SAKOM expanded the group of scholarship holders who have decided to study the Azerbaijani language. The candidates were nominated by the commission of the Faculty of Philology, and their scholarship applications were supported, among other necessary documentation, by the recommendation of the candidate’s lecturer, confirming their academic success.

SAKOM is looking forward to expanding its number of scholarship holders, wishing to support talented, hard-working, and goal-driven students.