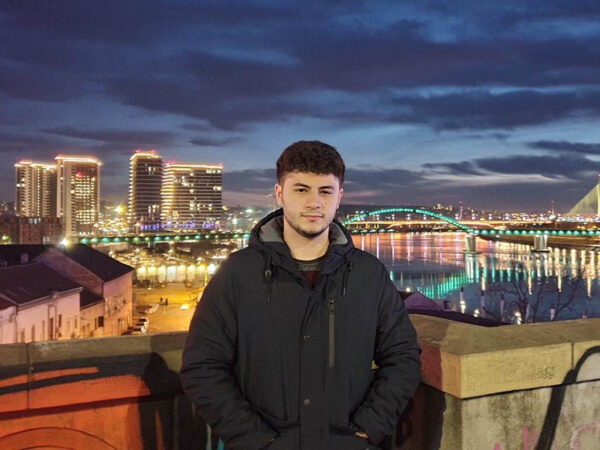 I am Taleh Alakbarli, an Azerbaijani student studying in Serbia. I became familiar with Serbia during my studies at Azerbaijan University of Languages. My major was Central and Eastern European regional studies and my second foreign language subject was Serbian. Serbian language classes are held in the center of Serbian language and culture, which is located in our University and opened directly on the initiative of Mr. Aleksandar Vučić. Thus, I became interested in Serbia and applied to the “World in Serbia” study program and was accepted.

I am currently studying International Relations at the Faculty of Political Sciences of the University of Belgrade. At the same time, I am a scholarship holder of the “SAKOM” organization established between the states of Serbia and Azerbaijan. The attention and care shown by the organization in Serbia makes me feel that I am in a friendly country and gives great motivation to my student life here. In addition, I would like to note that as an Azerbaijani, I do not feel like a stranger in Serbia. The reason for this is the similarities in the customs and traditions of Serbs and Azerbaijanis, in our mental values, in our relations in society, as well as in our cuisines and lifestyles. Our countries are warm, sincere and unique countries. In addition to these, one of the elements that make me love Serbia is its nature. I have visited several regions in Serbia, mainly in the northern part, and the trip made me want to travel all over Serbia. Also, my study trip in Serbia has also awakened some desires in me. My wish is that after completing my education, I would like to contribute to the strengthening and improvement of the relations between Serbia and Azerbaijan in the diplomatic field and to make the peoples know each other more closely.