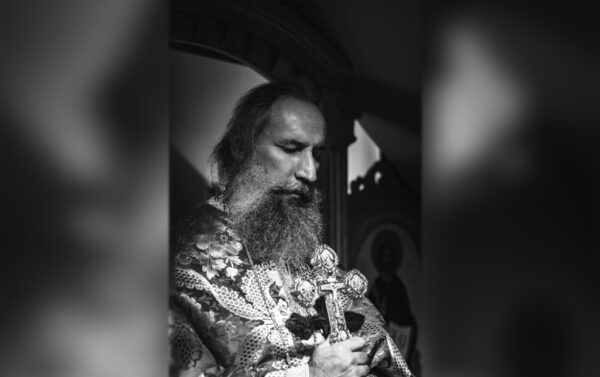 The Serbian-Azerbaijani Chamber of Commerce is saying goodbye with immense sadness to the late Archimandrite Romil Jelić, the Abbot of the Monastery “Duboki Potok,” with whom we had the honor of cooperating.

He entirely dedicated more than two decades of his life to renovating this fourteen-century-old monastery, which is an immovable property and a cultural monument. Thanks to his driving energy and absolute dedication to the church and the people he served with all his heart, he renovated the monastery, built lodgings, gathered people of goodwill, and turned his monastery into a spiritual refuge in Ibar Kolašin.

Where Father Romilo was, there was room for everyone and understanding for anybody. He deserved ineffable respect for his selfless giving and myriad benevolence. He was considered to be the embodiment of wisdom and goodness. His life path from Bosnia, where he was born in 1973, led to Belgrade, where he received his education, and later to Kosovo and Metohija, where he served in the monasteries of Zočište and Duboki Potok. His faith in the people remained solid even after he was kidnapped by extremists in 1998 and taken to a camp, where he was released by the intervention of the International Red Cross. Snipers shot him during the bombing of our country, yet he continued to love people of all faiths, not giving up on the peacekeeping mission, considering all troubles and sufferings as God’s grace.

This giant with a boy’s soul, steadfast faith, and incomprehensible wisdom, left accompanied by the prayers of all who have met him.

On September 20, the Bishop of Raška and Prizren, Mr. Teodosije, served the Holy Hierarch’s Liturgy and the service for the Abbot of the Monastery, Archimandrite Romilo in Duboki Potok. In his sermon, Bishop Teodosije referred to Archimandrite Romilo’s benevolence and notable role in the spiritual life of the people in Ibar Kolašin, whom he tirelessly had helped. “During his life, our father Romilo fulfilled the Divine commandment of love for God, for his holy church, and the people of God. Here, from this very place, I feel the need to say a few words that characterize his life in Christ here on earth. Inspired by the presence of the holy relics of the holy Healers and the great holy martyr Nikita, he begins with the renovation of the church and lodgings in this monastery. He clothed the monastery in a new spirit, helped by many believers from the area and those from afar. He worked tirelessly on the spiritual and material renewal of this monastery. The church was adorned in a new spirit; the boarding house was renovated, and the monastery gate was arranged. Father Romilo helped everyone both spiritually and materially, he was guided by the gospel principle, and when you do alms, your left hand does not know what your right hand does. Father Romilo did not talk much about how tirelessly he worked, on the other hand; that is why his deeds and alms speak the best about him. He was a beloved and spiritual leader to many. He comforted many souls with his gentle advice. He loved people and never judged anyone for their actions; he knew that judgment belongs to God only, while up to us is to love each other. That is why all people loved him and considered him their clergyman and spiritual father. There are many more secret deeds of our father Romilo that only God knows about. That is why all of us gathered here are praying to the Lord to rest his soul in peace and to be his merciful judge, bearing in mind that he too was merciful to others by emulating his Christ. Blessed be the path that his soul walks today, and may the Lord settle him in a paradise with the righteous and the saints, and may God grant him eternal life in heaven in the kingdom of Christ. May you be blessed with everlasting remembrance, and may God rest your soul.”

This beloved priest, clergyman, friend, and the great man was sent off with a lot of love, just as he will be remembered for his love. May he have eternal glory and praise.

The Serbian-Azerbaijani Chamber of Commerce will continue to support preserving the Monastery “Duboki Potok,” which has been the center of spiritual life and educational work for centuries. This monastery is of particular importance for the survival of the people in the northern part of Kosovo and Metohija.

Abbot Romilo Jelić was born in 1973 in Bosnia and Herzegovina. He studied theology in Belgrade and became a monk immediately after graduating. As a young monk, he went to Kosovo in 1993, where he first served in the Monastery “Crna Reka.” (Eng. Black River Monastery). In 1995, he moved to the Monastery “Zočište.”

Sharing the fate of his people, during the attack of Albanian extremists on July 21, 1998, in the village of Orahovac, Abbot Romilo was kidnapped together with 35 older men and women who found refuge in the Monastery “Zočište.” During his monastic life in the Monastery “Zočište,” Father Romilo was under Albanian separatists’ sniper fire on several occasions. By the will of God, he also survived the Monastery’s shelling when he was saved by a small wall behind which he happened to be at the time of the shelling. He survived a sniper shooting and capture by terrorists. Father Romilo was with the people during the entire war in Kosovo. After the end of the NATO bombing in 1999, when the Serbian population from that area was again forced to leave their homes, he had the onerous duty to take out the relics of the Holy Healers from the destroyed Monastery “Zočište.”

In 2000, the Bishop of Raška and Prizren decided to renovate the Monastery “Duboki Potok.” When he entrusted this enlightening task to the young Father Romilo, the Monastery was a sad ruin that did not possess a single road that would lead to it.

Much has been done since the arrival of Abbot Romilo in the Monastery “Duboki Potok.” The monastery was not only renovated in a constructive manner but also in a spiritual sense. It yet again has become a meeting place for the Serbian people from this area and beyond. The people gather here to celebrate and mark important moments for the Serbian people and the Orthodox faith.

Father Romilo, his humble life, diligent work, and his relatives – who came from Bosnia to help over the months – built a boarding house, renovated the church, built an altar, and painted the Monastery Church with frescoes. A road was built, and a monastic household was revived, which became widely known for its hospitality. He initiated and strengthened the local Serbian community, which has seen a new perspective of its survival in the Monastery. The once abandoned and ruined cultural and historical monument Monastery “Duboki Potok” has become a symbol of the living faith of the Serbian people in this part of Kosovo.

Archimandrite Romilo is highly respected and honored as a man who lived with his people and dedicated life to them. Father Romilo knew every child and every person who lived near the Monastery. He knew whose child was studying and which child needed books, sneakers, or the help of a doctor. He helped those in need and encouraged the successful ones to be even better and not to forget their people.

To see the importance of the reconstruction of the Monastery “Duboki Potok,” one must remember that over 110 churches and monasteries were torn down and destroyed by Albanian terrorists in Kosovo in the previous period. Guided by the idea that a person needs to do everything from the heart, Abbot Romilo is often quoted by the people because he has talked about a peaceful life and respect for all nations and religions.

Father Romilo – a guardian of the cultural heritage who gives strength to the inhabitants of this area to endure – promoted values close to all the world’s religions through his example and work. He advocated peace and mutual respect, understanding of the present moment, and nurturing tradition. Father Romilo was a man of essence and forgiveness, someone who believed in the good in people.

Whoever has met him does not forget him.